EMERGENCY RESPONSE: The nation’s six offices in Japan are to meet tomorrow to discuss how to revise protocols and improve communication between agencies

The Taipei Economic and Cultural Representative Office in Japan is to re-examine its emergency response mechanism after it came under fire for its failure to provide prompt assistance to Taiwanese stranded in Japan last week in the wake of Typhoon Jebi, which caused significant damage in Osaka, Minister of Foreign Affairs Joseph Wu （吳釗燮） said on Wednesday.

“After the Osaka incident, Representative to Japan Frank Hsieh （謝長廷） realized the kind of role he has to play when our people are in need of emergency assistance,” Wu told a media tea gathering in Taipei.

“I believe everyone has learned their lesson from the Osaka incident,” he added.

Wu was responding to media inquiries about how the Ministry of Foreign Affairs plans to improve its public services after the Chinese Nationalist Party （KMT） and some members of the public criticized the office in Japan for its alleged inaction and indifference to the plight of Taiwanese who were stranded there.

A netizen said they last week telephoned the office to ask whether it could help them find accommodation, to which an office representative allegedly responded: “How could I help you with that? Where you want to stay is your own choice.”

Hsieh faced particularly fierce criticism, as he on Wednesday last week — the day the storm hit Osaka — on Facebook responded to the KMT’s criticism of the Democratic Progressive Party’s election strategies.

The office is to meet tomorrow to discuss how to revise its emergency response protocols with the nation’s five representative offices in Japan.

Wu said the offices would re-examine their emergency response mechanisms to ensure that they are capable of promptly mobilizing resources during a crisis.

“There is indeed room for improvement if we failed to properly handle an anticipated disaster like Typhoon Jebi,” Wu said, adding that the offices would adjust the number of officials in charge of answering emergency lines.

Communication among government agencies also needs improvement — especially between the ministry and the Tourism Bureau, as this case demonstrated — so that the government would be better equipped to offer assistance, Wu said.

He also rejected reports that President Tsai Ing-wen （蔡英文） is planning to give a donation to Japan to aid its post-disaster relief efforts, saying that Tokyo has declined the government’s offer of help for now. 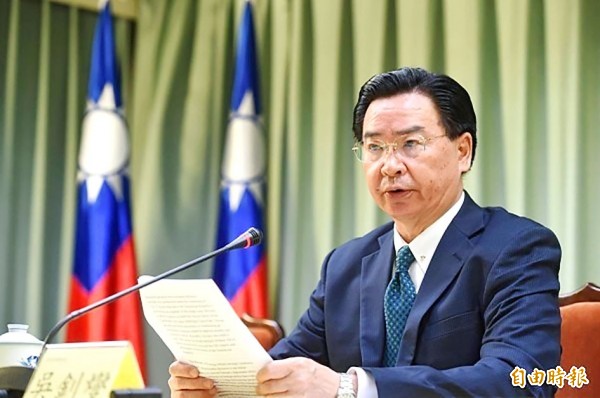 Minister of Foreign Affairs Joseph Wu is pictured at the ministry in Taipei in an undated photograph. Photo: Fang Pin-chao, Taipei Times