By entering the nation’s media market, Tencent and Youku are exploiting a legal loophole that allows Chinese corporations to distribute video and audio through an agent registered in Taiwan, as online video streaming platform iQiyi has done, Cheng said.

Such content is the jurisdiction of the Ministry of Culture and not subject to the Act Governing Relations Between the People of the Taiwan Area and the Mainland Area （臺灣地區與大陸地區人民關係條例）, he said.

Many of the nation’s cable companies provide their users access to iQiyi programs, which include children’s shows featuring simplified Chinese characters, he said.

“The zaoan （早安） and wan （晚） that we are used to saying are being replaced by zaoshanghao （早上好） and wanshanghao （晚上好）,” he said, referring to morning and evening greetings, with the former pair being more common in Taiwan and the latter in China.

“These shows are slowly influencing Taiwanese culture and idioms,” Cheng said. “They [the companies] are not in Taiwan to make money, they are here to control the market. Think about Taiwan’s children.”

Fake social media accounts in China could be expected to use Tencent services to engage in propaganda campaigns and abuse Taiwan’s freedom of speech, he said.

In 2016, iQiyi established its Taiwanese Web site through a business agent registered as OTT Entertainment （歐銻銻）, after its application to create a Taiwanese subsidiary was turned down by the Ministry of Economic Affairs.

National Communications Commission Chairwoman Nicole Chan （詹婷怡） yesterday said that the commission would today discuss the regulation of cable and Web-based streaming services with the Ministry of Culture.

The two agencies would discuss any subject pertaining to streaming platforms, including Tencent and Youku’s reported attempts to enter the nation’s market, she said.

Foreign streaming service providers have an advantage in capital over Taiwanese companies and they are aggressively expanding market share, said Chien Ta-wei （錢大衛）, president of the Taiwan Over-the-Top Media Services Association and a former senior vice president of technology and licensing at TiVo.

The government should require all foreign companies to register their business agents, consumer service representatives and subsidiaries in Taiwan as a condition to provide streaming services in Taiwan, he said. 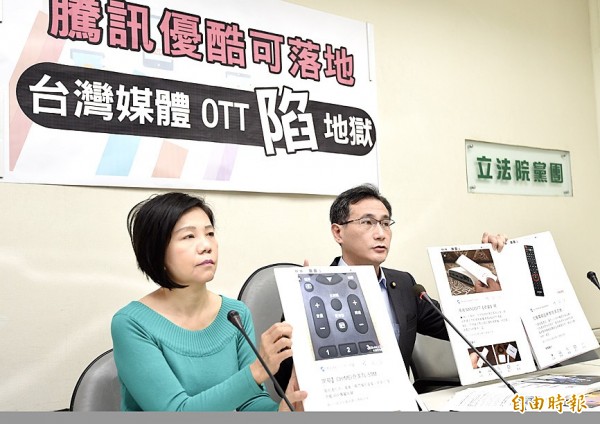