A coalition of civic organizations yesterday called for amendments to the Civil Code to lower the nation’s legal age of adulthood from 20 to 18.

The Taiwan Alliance for Advancement of Youth Rights and Welfare, National Taiwan University Student Association, and Taiwan Youth Association for Democracy said they would establish an “Amend the Civil Code for the Youth Front” to accentuate their joint appeal.

The legal age of adulthood in the Civil Code is 20, but the Criminal Code defines it as 18, the group said, adding that the gap has caused inconvenience for 578,000 Taiwanese aged 18 to 20.

For example, people aged 18 to 20 cannot sign a contract with mobile carriers, take out a student loan, open a bank account, form a civic group or launch a start-up, but they can marry and are subject to full criminal liabilities, military duties and tax, they added.

This shows a lack of uniformity between power and responsibility, the group said, adding that the UK, France and Germany lowered the legal age of adulthood to 18 in the 1970s, while Japan passed similar legislation last year.

Allowing 18-year-olds — who grew up in the Internet era and received higher education — to exercise full autonomy is the consensus reached by the international community, it said.

Amending the Civil Code is a matter of establishing uniformity between power and responsibility, youth rights and making Taiwan follow international practices, rather than a matter of the ability or maturity of young people, group spokesperson Yeh Ta-hua （葉大華） said. 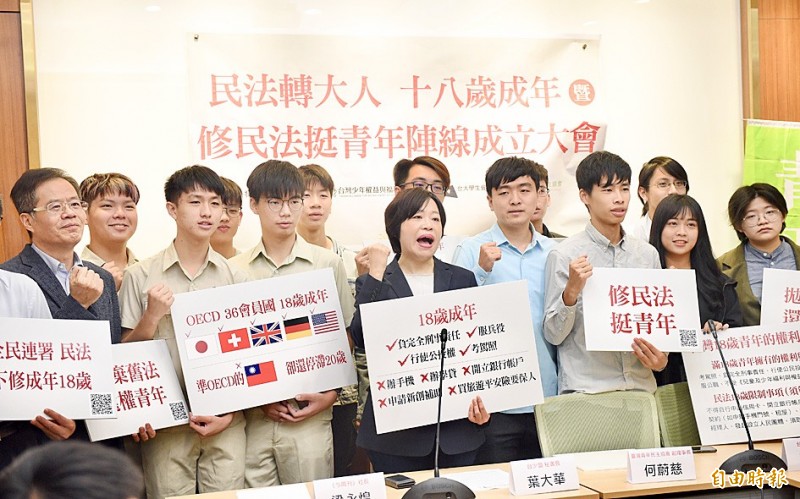 Members of civic groups at a news conference at the Legislative Yuan in Taipei yesterday promote an alliance in a bid to lower the legal age of adulthood to 18. Photo: Peter Lo, Taipei Times