CURFEW? The ‘Global Times’ said online that a curfew in the territory was possible this weekend, although it later deleted the message, citing insufficient information

Pro-democracy protesters challenging China’s rule of Hong Kong yesterday choked the territory with barricades and rallies for a fourth straight day, while police drafted in reinforcements and Chinese state media fueled speculation of a curfew.

The five-month crisis entered a new phase on Monday, when protesters embarked on a campaign to “blossom everywhere” across the territory in a bid to stretch police resources as thinly as possible.

Another element of the protesters’ tactical shift was to disrupt the territory for consecutive days in a workweek, switching from their long-running strategy of primarily protesting on weekends or in evenings.

With the protesters showing no signs of relenting, the nearly 30,000-strong police force announced it was drafting in 100 prison guards and looking for other reinforcements.

“The ongoing riots ... with their massive scale, simultaneous occurrence in various districts and grave severity of violence, make it necessary to strengthen the support for the police’s frontline officers,” a police spokesman said in a statement announcing that the prison guards would be called in.

No other reinforcement measures were announced, although Hong Kong Legislator Starry Lee （李慧瓊）, of the territory’s biggest pro-Beijing party, urged the deployment of auxiliary officers.

The part-time volunteer force of civilians and ex-officers is usually used to direct traffic and control crowds at major outdoor sports or entertainment events.

In China, the Global Times reported that a Hong Kong curfew was possible.

The Global Times wrote online that the Hong Kong government was considering the implementation of a curfew at the weekend.

However, it later deleted the message. 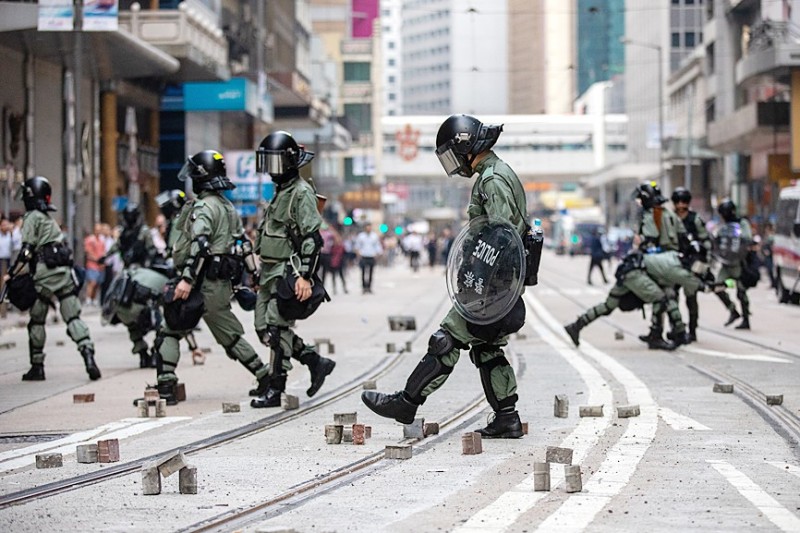