Chen, an NTU graduate and assistant professor at Carnegie Mellon University, was found dead on the campus on July 3, 1981, a day after being questioned by the Taiwan Garrison Command.

In 2011, the Dr Chen Wen-chen Memorial Foundation wrote to NTU about raising a monument in his honor, but received no response, the association said, adding that a student proposal sent to the Gallery of NTU History in 2012 also went unanswered.

Following the passage of proposals for the name of the memorial square and a monument at university affairs meetings in 2014 and 2015, a call for designs was made in 2016, but funding became an issue the following year, it said.

While former NTU president Yang Pan-chyr （楊泮池） had promised that the university would cover half of the costs, NTU president Kuan Chung-ming （管中閔） has refused to allow the university to fund or raise funds for the project, or help promote the foundation’s fundraising campaign due to the “political sensitivity” of the issue, the association said.

Nevertheless, the foundation has raised the NT$12 million （US$398,340） needed for the memorial square, the association said, adding that a donation agreement was signed with NTU on Monday.

The association said that it saw how the legacy of the authoritarian system endures in today’s democratic society when advocating for the construction of the memorial.

The truth has yet to be made public and justice has not been served, it said, adding that it hopes the memorial would prevent Chen’s death from being forgotten.

In related news, an annual event held by the foundation, the Taiwan Gongsheng Youth Association and 44 other groups to commemorate the 228 Incident, which is to mark its 73rd anniversary this year, is to return for its fourth edition.

This year, organizers said that they plan on marching past several historical sites related to the Incident, including Taipei’s Rixin Elementary School, the Tianma Tea House （天馬茶房） and the now-defunct Taiwan Province Monopoly Bureau’s Taipei branch.

During the march, participants are to read the names of the Incident’s victims and use sign language to perform poetry communicating the “silent voices” of the victims and their families, they said.

Through the event, organizers said that they hope to continue urging those in power to achieve transitional justice and the public to “refuse to forget and insist on resisting.” 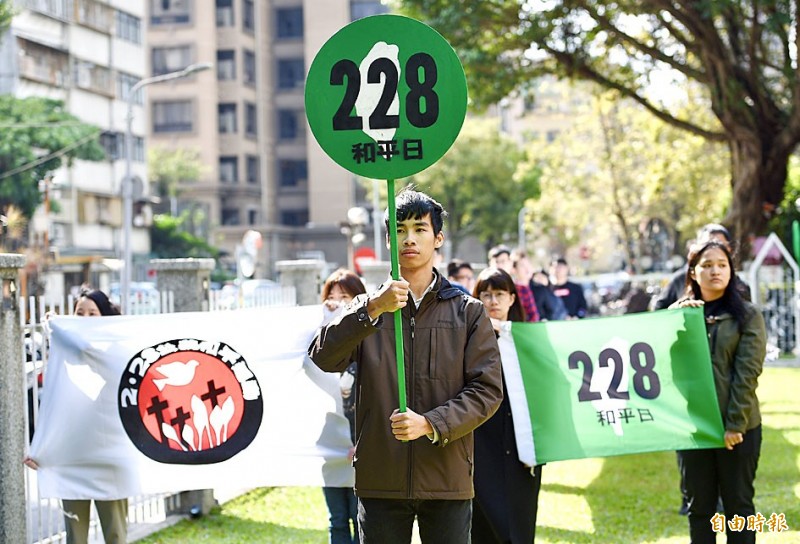 Advocates hold placards and banners at a news conference in Taipei yesterday to promote a street march scheduled for Saturday to mark the 228 Incident. Photo: Peter Lo, Taipei Times