DOWNPOUR: Evacuation orders were in effect yesterday for the mountainous areas of Kaohsiung, while Pingtung officials expected heavy agricultural losses due to rain

A section of the Central Cross-Island Highway yesterday morning reopened to traffic after workers cleared a rockslide caused by torrential rains on Friday night.

Debris from the rockslide, which occurred at about 1am in Taichung’s Lileng （裡冷） and cut off traffic in both directions, was removed by maintenance workers, allowing traffic to resume at 9:25am, the Directorate General of Highways said in a news release.

Separately, a 3-tonne boulder fell on the coastal Huhai Road near Keelung’s Waimushan （外木山） at about 5:40am, blocking traffic before being cleared at 8:20am, city officials said.

The Taiwan Railways Administration at 8:40am halted service on the Shenao Line due to a tree that fell on the tracks between Haikeguan Station （海科館） and Badouzi Station （八斗子）, the agency said.

Service has since been restored in both directions, the agency’s app showed.

No injuries were reported in any of the incidents.

Traffic disruptions followed a plum rain front that affected most of Taiwan on Friday, dumping up to 350mm of rain in southern Taiwan, the Central Weather Bureau said.

Mostly cloudy skies and slightly higher temperatures are forecast nationwide for today and tomorrow, although the risk of localized showers and thunderstorms would remain in the south, the bureau said.

From tomorrow afternoon, the weather system is expected to move north again, bringing showers and thunderstorms, as well as the risk of severe weather in much of the nation on Tuesday and Wednesday, the bureau said.

More than 3,000 people in the mountainous areas of Kaohsiung yesterday remained under evacuation orders amid fears of mudslides.

As of 6am, 3,485 Kaohsiung residents had been evacuated, including 1,056 from Namasiya District （那瑪夏）, 842 from Liouguei District （六龜） and 758 from Taoyuan District （桃源）, the Kaohsiung Civil Affairs Bureau said.

The city, which has set up a disaster response unit to deal with the rain damage, said it would wait until landslide warnings are lifted before assessing whether it is safe for the evacuees to return to their homes.

The Pingtung County Government has estimated that agricultural losses from the rain would exceed NT$8 million （US$266,587）, after extensive damage was reported to the county’s rice, bitter melon and luffa crops.

Four townships and 10 villages in the county remained under red alert for landslides, which are issued by the Soil and Water Conservation Bureau when measured rainfall exceeds an area’s warning threshold for debris flows. 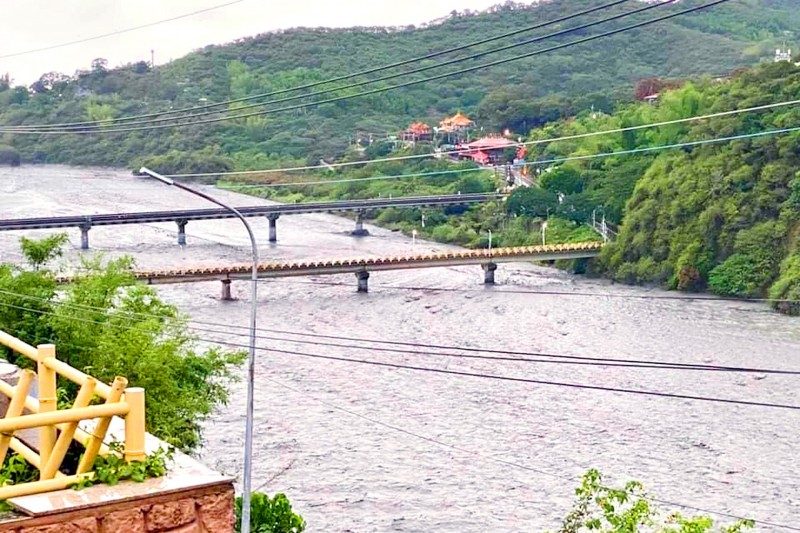