PREPAREDNESS: A CECC adviser said that information about the drug has been positive, so most specialists support its import, which will help if the virus surges

At the CECC’s daily news conference in Taipei, Minister of Health and Welfare Chen Shih-chung （陳時中）, who heads the center, said that no new cases have been confirmed, while 421 people have been released from isolation after contracting the novel coronavirus.

“Taiwan remains the same — with no new domestic cases reported in 48 consecutive days,” Chen said. “However, the COVID-19 situation globally is still serious and almost 6 million cases have been confirmed, so we have to be extra careful about border controls.”

After a specialist meeting on Friday, the FDA approved remdesivir to treat people with severe COVID-19, Chen said.

FDA Director-General Wu Shou-mei （吳秀梅） said that to respond to the pandemic, Taiwan needs to prepare treatments, so the administration reached out to pharmaceutical companies.

Gilead Sciences Inc, which produces the experimental antiviral drug under the brand name Veklury, on Monday submitted documents to have the drug approved, and the FDA and the Center for Drug Evaluation immediately launched a review, Wu said.

The review was completed by Thursday and with the meeting on Friday, the agencies decided that based on Article 48 of the Pharmaceutical Affairs Act （藥事法）, conditional approval would be granted to import Veklury, she said.

The drug can be used to treat severe cases in adults and children, with treatment limited to a maximum of 10 days, she said.

Gilead must enforce a risk management plan and the results of new clinical trials must be immediately sent to the FDA for review, while technical data must be collated within a year, Wu said.

Adult patients are to have 200mg of the drug injected on the first day and receive a 100mg injection once per day from the second day, while children are to be given the same doses if they weigh at least 40kg, she said, adding that dosages would be adjusted according to body weight for children who weigh less than 40kg.

“As many clinical trials are still ongoing, it [remdesivir] is so far one of the most promising drugs we have observed, but the drug approval was granted quickly in response to the emergency need in Taiwan,” Wu said.

The US Food and Drug Administration on May 1 gave the drug emergency use authorization for people hospitalized with severe COVID-19, while Japan on May 7 was the first nation to grant it regulatory approval.

Taiwan is the second nation in the world to have approved the drug.

CECC advisory specialist panel convener Chang Shan-chwen （張上淳） said that although evidence might not yet be sufficient, information on the drug’s effects has been positive, so most specialists support importing the drug to prepare the health system for the possibility of another outbreak.

The drug would only be administered with the informed consent of the patient, and their kidney and liver functions would be monitored to check for adverse reactions, Chang said.

Remdesivir was developed to treat Ebola, but clinical trials showed that it was not effective enough, Wu said.

However, it improved symptoms in severe COVID-19 cases in clinical trials, in which 11 Taiwanese participated, she said.

After the conditional approval is officially granted next week, the FDA plans to order 1,000 doses, which are expected to arrive in Taiwan by late July at the earliest, she said. 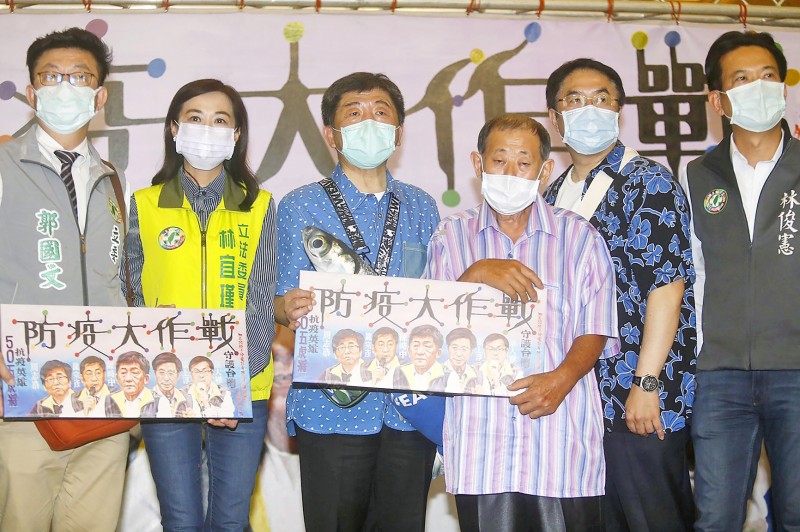 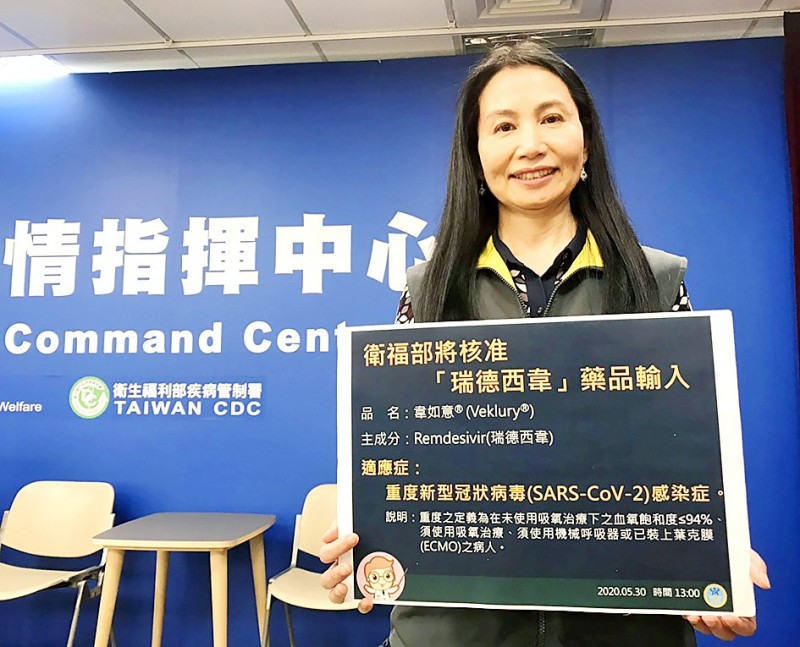 Food and Drug Administration Director-General Wu Shou-mei, who is also deputy head of the Central Epidemic Command Center’s （CECC） research team, holds a sign at the CECC’s daily briefing in Taipei yesterday explaining that the Ministry of Health and Welfare would approve imports of remdesivir. Photo: CNA