China yesterday imposed a sweeping national security law on Hong Kong, a historic move that critics and many Western governments fear will smother the territory’s freedoms and hollow out its autonomy.

As the law was signed by Chinese President Xi Jinping （習近平） little more than six weeks after it was first unveiled, Beijing described it as a “sword” hanging over the heads of those who endanger national security.

The contents of the law have so far been kept secret from Hong Kong’s 7.5 million inhabitants, sparking alarm, anger and fear.

“It marks the end of Hong Kong that the world knew before,” prominent democracy campaigner Joshua Wong （黃之鋒） wrote on Twitter as his political party Demosisto announced that it was disbanding. “With sweeping powers and ill-defined law, the city will turn into a #secretpolicestate.”

Some Hong Kongers said that they were deleting their Twitter accounts and scrubbing other social media platforms.

In contrast, former Hong Kong chief executive Leung Chun-ying （梁振英） took to Facebook to offer bounties of up to HK$1 million （US$129,026） for anyone who could help secure the first prosecutions under the new legislation or track down people who have recently fled the territory.

The US, Britain, the EU and Human Rights Watch have all voiced fears it could be used to stifle criticism of Beijing, which wields similar laws to crush dissent on the mainland.

“The fact that Hong Kong people will only come to know what’s really in this new law after the fact is more than preposterous,” said Claudia Mo （毛孟靜）, an opposition Hong Kong lawmaker.

A summary of the legislation published by Xinhua news agency this month said that it would cover subversion, secession, terrorism and colluding with foreign forces.

China’s security agencies would also be able to set up publicly in the territory for the first time. Beijing will also have jurisdiction over some cases, toppling the legal firewall that has existed between Hong Kong and the mainland’s Chinese Communist Party-controlled courts.

On the mainland, national security laws are routinely used to jail critics, especially for the vague offense of “subversion.”

Speaking via video link to the UN Human Rights Council in Geneva, Lam attempted to defend the law.

The Beijing-appointed leader said that Hong Kong had been living with “a gaping hole in national security,” and that the law was “urgently needed.”

Lam said that the legislation would help heal a territory “traumatized by escalating violence fanned by external forces.”

She was referring to last year’s pro-democracy protests, which began in response to a now-withdrawn bill that would have allowed extraditions to the mainland.

“I urge the international community to respect our country’s right to safeguard national security, and Hong Kong people’s aspirations for stability and harmony,” she said. 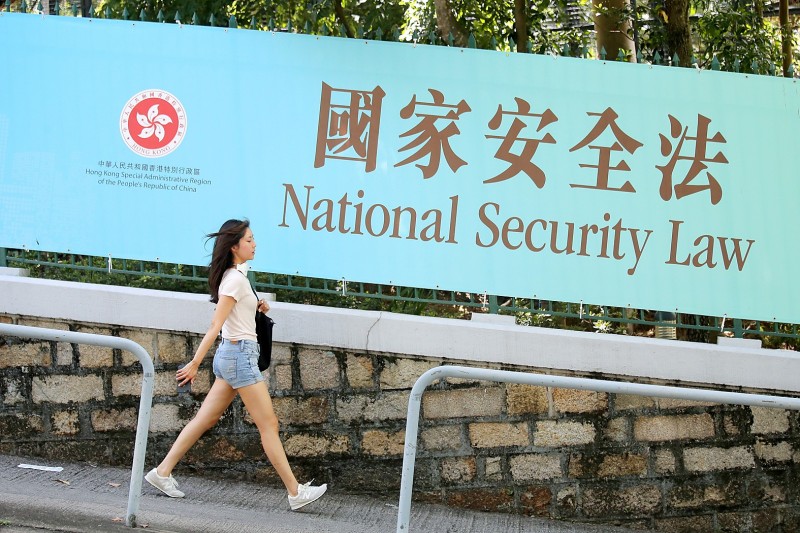 A woman walks past a promotional banner for the national security law for Hong Kong, in Hong Kong yesterday. Photo: AP 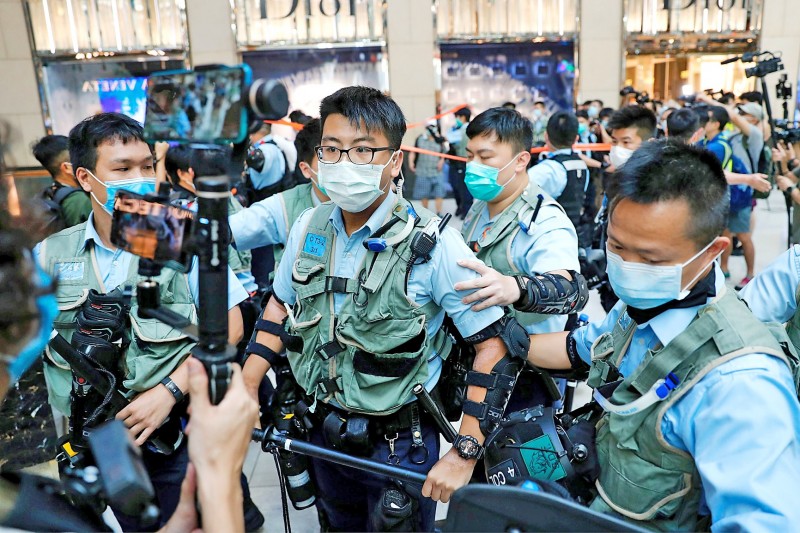