《TAIPEI TIMES》Local firms have vital role in US: Azar

IMPRESSIVE CAPABILITY: The US secretary of health said that he discussed with local business leaders how Taiwanese firms can help the US to produce more strategic goods

Taiwanese businesses are to play a vital role in US supply chains as Washington boosts domestic production of strategic goods, US Secretary of Health and Human Services Alex Azar said yesterday, before ending his four-day visit in Taiwan.

“We got to see the [factory’s] impressive manufacturing capability to produce face masks as well as N95 respirators,” Azar said, commending the government and private sector in Taiwan for their ability to scale up mask production “just as what we are doing in the United States.”

Some of the machines produced at the factory are to be sold to the US as part of US President Donald Trump’s plan to build up the US’ capacity for manufacturing masks and N95 respirators, he said.

Trump has proposed stocking 90-day reserves of disease prevention goods, with as much as possible produced in the US, he added.

The machines exported by Chang Hong would play a critical role in the US’ plan to boost production of these goods, he said.

Azar said that he had discussed with high-ranking officials and business leaders how Taiwanese firms can invest more in the US, as Washington seeks to increase the country’s industrial production of strategic goods.

Prior to the factory visit, Azar teleconferenced with journalists, an event hosted by the US Asia Pacific Media Hub.

Asked if signing a bilateral trade agreement was pertinent to his discussions with Taiwanese officials, Azar said: “We did discuss trade issues, including questions surrounding bilateral trade arrangements,” but added that he could not provide details.

The US delegation left Taiwan in the afternoon on a US government plane from Taipei International Airport （Songshan airport）.

Azar’s trip, the highest-level visit by a US Cabinet official since 1979, resulted in many substantial achievements, including a shared hope in increased bilateral cooperation on industrial production, the Ministry of Foreign Affairs said later in a news release.

The ministry thanked the US and Azar for their strong support for Taiwan, while pledging to further contribute to the international community on issues of global concern.

Azar’s meeting with President Tsai Ing-wen （蔡英文） on Monday caused a brief uproar when his first reference to Tsai in his speech provoked debate over whether he had called her “President Xi” or “presidency.”

During an interview with the Central News Agency on Tuesday, Azar said he “accidentally mispronounced” Tsai’s surname at the beginning of his speech, although pronounced it correctly thereafter. 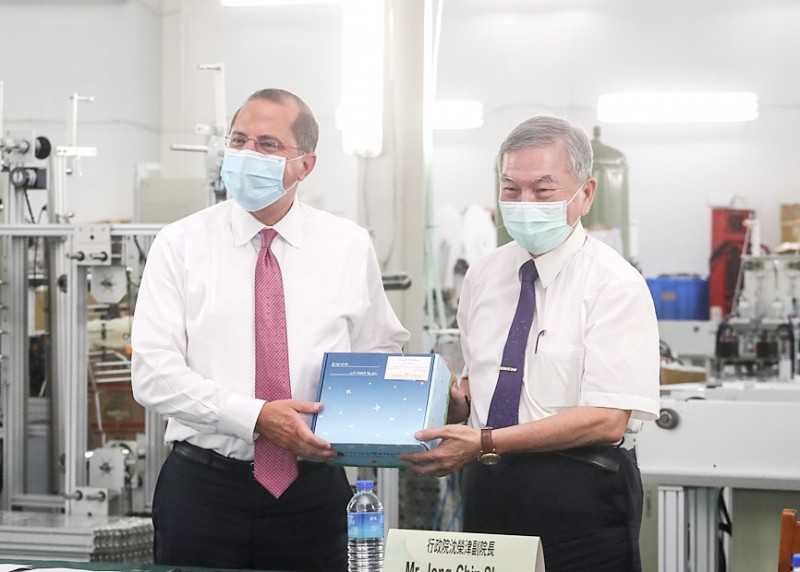