Taiwanese-independence advocates yesterday accused former president Ma Ying-jeou （馬英九） of breaking national security laws and called on the judiciary to investigate after his statement that “China will wage a battle, which will be quick and will be the last battle for Taiwan.”

Ma showed his true colors “as a mouthpiece of the Chinese Communist Party” in his speech on Monday when he said the “first battle will be the last,” Taiwan Republic Office （台灣國辦公室） director Chilly Chen （陳峻涵） said.

“Ma is threatening Taiwanese by claiming that Beijing will launch a quick invasion of Taiwan, but that the US military will have no time and no chance to come to Taiwan’s aid,” Chen said.

Chen and other protesters called Ma “a bootlicker” of Chinese President Xi Jinping （習近平） and a colluder with an enemy state, seeking to sell out Taiwan.

At the protest in front of Chinese Nationalist Party’s （KMT） headquarters in Taipei, Taiwan Republic Office members performed a skit in which Chen, wearing a Ma mask, acted as if he were committing hara-kiri.

“We are asking Ma to perform hara-kiri as a public apology to our citizens for selling out Taiwan... We cannot accept Ma’s talk of capitulation — and that coming from a former president, who is now a propagandist for China and coerces the Taiwanese to surrender to China without a fight,” Chen said.

“Ma’s talks show that he has no comprehension of modern warfare, but he is undermining the confidence of Taiwan’s military and its ability to defend our homeland, while wrecking Taiwan’s chances of forming an alliance with other democratic nations to counter China’s warmongering and hegemony in the Asia-Pacific,” Chen said.

“We are not surprised at all because Ma — coming from the KMT one-party state — has fought democratic values and people’s right to self-determination and is always seen cowering in the face of Chinese aggression,” he added.

Other protesters presented documents and news reports in which the former president and KMT lawmakers stalled legislative sessions 69 times from 2008 to 2016, eventually blocking three major arms deals with the US.

During Ma’s presidency, he tried to end the development of indigenous missiles at Taiwan’s top weapons research institutes, they added.

Taipei City Councilor Wang Shih-chien （王世堅） of the Democratic Progressive Party said that Ma speaks as if he is the head of a Chinese state media outlet.

“Now Ma is showing the world where his loyalties lie, and since he left the presidency, Ma has acted as a propagandist for China and no longer pretends to act in Taiwan’s best interests,” Wang said. 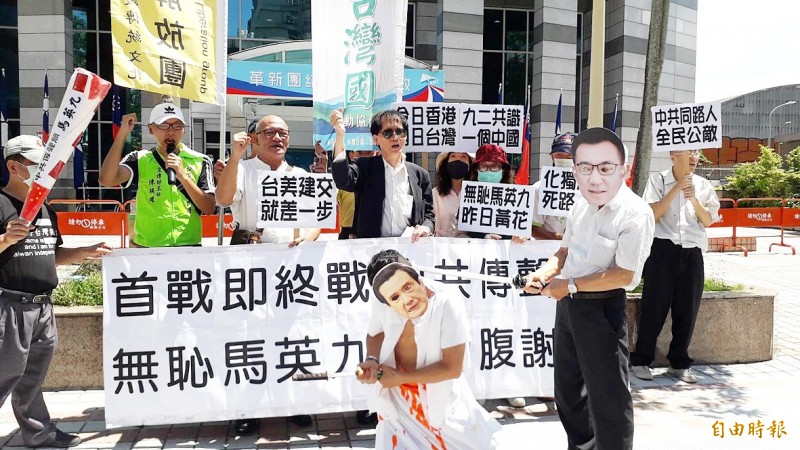