Kaohsiung Mayor Han Kuo-yu （韓國瑜） yesterday said that he was willing to take back remarks he made on Monday comparing President Tsai Ing-wen （蔡英文） and former premier Willian Lai （賴清德） to characters from the Chinese classical novel Water Margin （水滸傳）.

The Chinese Nationalist Party’s （KMT） presidential candidate compared a possible Tsai-Lai ticket for the Jan. 11 presidential election to characters Wu Dalang （武大郎） and his wife, Pan Jinlian （潘金蓮）, saying: “Pan and Wu under the blanket; their heads lie on the same pillow, but their feet match not.”

Lai seems to be unhappy about having to cooperate with Tsai after the attacks he suffered from Tsai’s “cybertroops” when competing against her in the Democratic Progressive Party （DPP） presidential primary this year, Han said.

The DPP has called the remark “vulgar and inappropriate.”

“If people think the remarks were too uncultured, I am willing to take them back,” Han told reporters at a news conference for the logo for his presidential campaign.

He had made the comparison to express his sense that Tsai and Lai were not on the same page about their collaboration, he said.

They are only cooperating to promote their political interests, unlike he and his vice presidential candidate, former premier Simon Chang （張善政）, Han said.

“We have formed a team because of our shared concern about Taiwan’s future and we really want to see Taiwan improve,” he said.

“We believe that the KMT is using issue to garner votes,” said Tsao Cheng-hsi （曹承羲）, a senior manager at the coalition.

Last month, the Gender Equity Education Coalition sent a letter to the presidential candidates, asking them to pledge that they would not spread rumors about homosexuals and help promote correct information about homosexuality, Tsao said.

While Tsai’s team said that it hopes to make Taiwan more friendly to people of different gender identities and eliminate gender discrimination, Han’s team did not respond, he said. 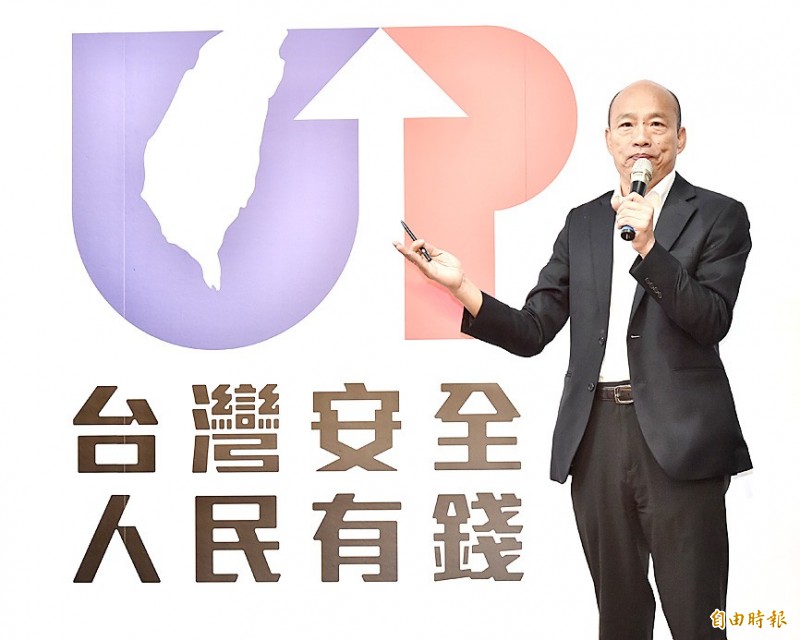 Members of non-governmental organizations hold signs at a news conference at the Legislative Yuan in Taipei yesterday urging politicians not to lie and to be role models for children in the run-up to the elections on Jan. 11. Photo: Liu Hsin-de, Taipei Times